The PGA Cup originated in 1973 at Pinehurst Country Club in North Carolina as an outgrowth of the PGA Club Professional Championship. Structured after the format of the Ryder Cup, which features competition between the U.S. and Europe, the PGA Cup features the top PGA club professionals from both sides of the Atlantic.

Competition was held annually until 1984, when both sides agreed to hold this event biennially at alternating sites. Since its inception, the U.S. has won 14 cups, Great Britain and Ireland have won 4 cups, and there were 3 ties.

The PGA selected Knollwood Club to host the 13th International PGA Cup Matches in September 1986. An outstanding team of American Club Professionals defeated the best that Great Britain and Ireland had to offer, 16 to 9. The U.S. team won back the Llandudno International Trophy after an absence of four years, as American depth took its toll throughout the singles round on the final day. The final match on the course was most entertaining. Charlie Epps of the U.S. squad and Scotsman Willie Milne, a burly golf-range operator, saved the best for last. They reached the 438-yard 18th hole even. Epps knocked his approach to the middle of the green, while Milne flew his 8-iron approach over the green and his chip shot eight feet past the cup. Epps followed by putting to within inches of the cup. As Milne prepared to replace his ball, Epps stunned players and officials by conceding the eight- footer for a halved match. Milne gave Epps a bear hug in the middle of the green.

The Cup Matches were featured in the November 1986 issue of PGA Magazine, with a spectacular two-page photograph of our Clubhouse highlighting the article. The Knollwood Golf Shop is proud to display a beautiful bronze commemorative plaque of the tournament. 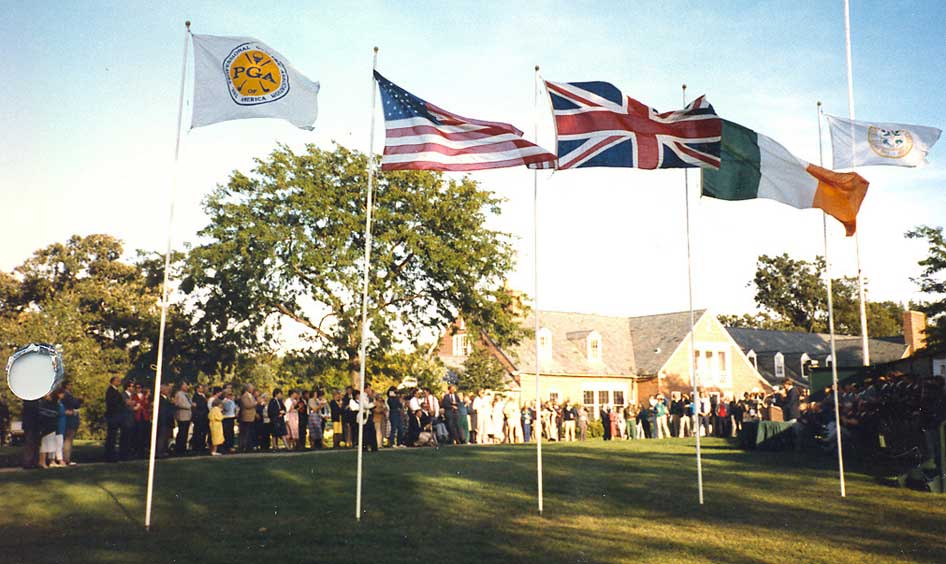